How to Eliminate High-Cost Technical Debt in SAP

Recent surveys have shown that companies spend 60-80% of their time, budget and workforce on simply keeping the lights on – tasks that keep their operations simply running. In contrast, merely 7% of resources are spent on innovation. This is true for most applications - including SAP.

Realizing why companies struggle with innovation, the Pillir team created a unique, ABAP tool called SAP technical debt dashboard to help SAP customers understand how much time, money and resources are spent on unnecessary customizations and how to lower technical debt in the process. ABAP, a legacy coding language, has an incredible history, but also comes with a heavy price tag as time has progressed.

SAP’s more recent ECC and S/4HANA also use ABAP for customizations and now, SAP has announced that it will continue supporting S/4HANA with ABAP until 2040.

In the 1980s, ABAP was as efficient as any other language. While better tools and languages have since been developed, SAP continues to utilize ABAP.

Today, code generators provide auto-generated code blocks, accommodating multiple languages. It is projected that by 2040, low-code and no-code generators will continue to advance, leaving languages like SAP’s ABAP vulnerable to legacy inefficiencies and questions pertaining to its ability to continue to support modern technologies.

According to Gartner, each application typically has a pyramid of three layers. The largest is the System of Records (SOR) which includes all standardizations, operation efficiency and compliance (used for mission-critical core processes). The second layer is the System of Differentiation (SOD) which includes all unique processes  providing the competitive advantage to the enterprise. The top-most and smallest layer is the System of Innovation (SOI), which focuses on the next competitive edge (generally used for new and innovative ideas)). 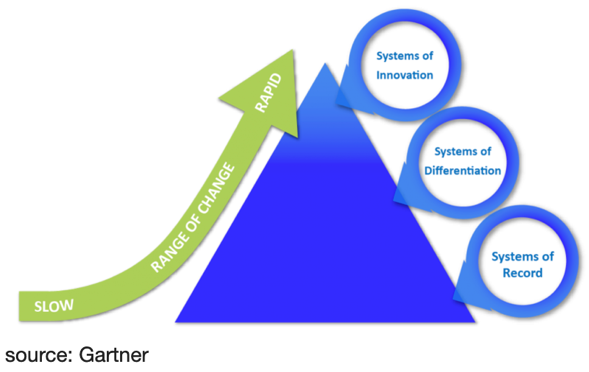 The ease of change increases as you go up on the pyramid, i.e., it should be easier build and deploy new applications on the SOI than SOR. With all the ABAP customizations over the past decade or more, most enterprises have collapsed the SOR and SOD in ECC into one big layer that makes it difficult and time-consuming to innovate on SAP ECC.

Moving forward, we have a great opportunity for transforming the current scenario: Gartner’s pyramid can be flipped so that it receives maximum resources and in turn, save costs in SAP ERP. 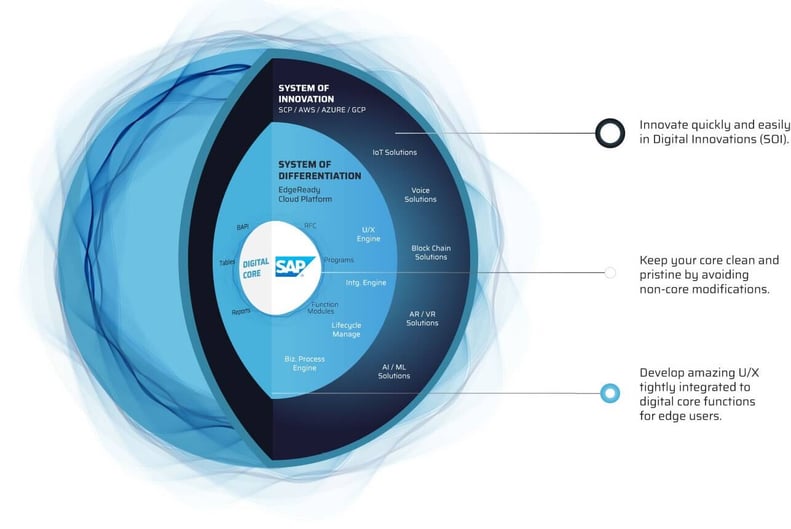 The model for achieving this would include the SAP application at the Digital Core. This will be the SOR layer, pristine and unaltered - surrounded by the Digital Edge, which is the SOD layer. All customizations needed for meeting unique business requirements would exist in this layer. It will be tightly integrated with the S/4HANA but still exist outside it, thus ensuring easy changes. Finally, the outer layer would be for Innovation, completely removed from the digital core and aimed at developing new solutions.

Pillir (Formerly appsFreedom), is a low-code, cloud-native, PaaS provider that specializes in enabling customers to generate resilient, always-available, self-managing applications that work in any connectivity landscape.

EdgeReady Cloud, shown in the above images as the system of differentiation (SOD), provides rapid application development with little-to-no programming and reusable objects; enabling companies to enhance speed to market and innovation. With pre-built integrations for SAP, customers leverage Pillir to modernize any process or application in weeks, regardless of connectivity, device or back end system. EdgeReady Cloud automates the process of building applications for anyone on your team and helps to lower costs in SAP ERP systems.

With no strings attached, use our interactive technical debt calculator to discover how much technical debt your SAP system may have and how much you could reduce it by. 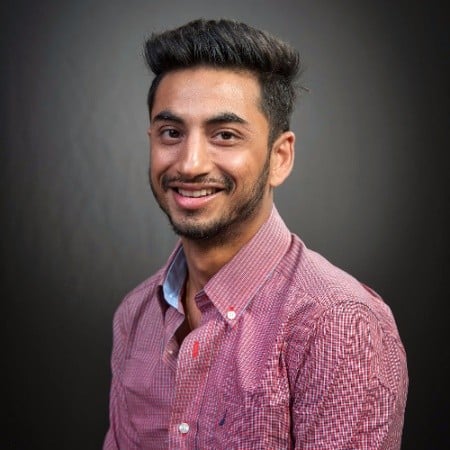 Are Companies Creating ZAP Out of SAP?